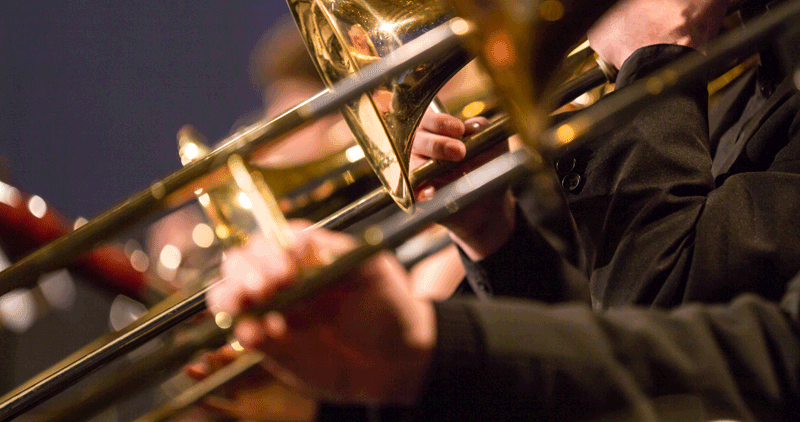 The premier performance of the Springfield Symphony Jazz Orchestra (SSJO) will feature the music of the two most influential band leaders in jazz history — Count Basie and Duke Ellington. These iconic figures created the soundtrack for the lives of generations of Americans. This inaugural concert will explore their music as a fine art, music that not only transformed our nation, but created an aesthetic that lives on today in nearly every school, community, and professional jazz artist alive.

During the first half of the SSJO concert you will hear lesser-known early works from the initial Basie ensemble (The “Old Testament Band”) that came roaring out of Kansas City to create what would become the sound of modern jazz — 4/4 swing, stompin’ blues, and music by Buck Clayton, Eddie Durham, and Neal Hefti. Basie’s second iteration of the band (the “New Testament”) featured a powerful horn section and music by legendary composers Frank Foster, the aforementioned Hefti, Ernie Wilkins, and others. Expect to be delighted by familiar hits like April in Paris and thrilled by early classics like Avenue C. The SSJO will present some of the iconic works of Basie and Joe Williams including the hit Everyday I have the Blues.

The second half features the music of Edward Kennedy “Duke” Ellington. Arguably our most important and prolific composer, Duke composed nearly 3,000 works. These include the most diverse collection of big band music we will likely ever see. From the Cotton Club shows of the 1920’s to the extended Suites of the ‘50’s and 60’s, Ellington continued to explore sounds, styles, and textures well into the 1970’s, with some of his finest work completed in the last decade of his life. The SSJO presentation will feature music spanning six decades, including hits such as Rockin’ in Rhythm and Do Nothing ‘til You Hear from Me, while introducing works such as 1946’s Happy Go Lucky Local and 1971’s Chinoiserie from his landmark album, the Afro-Eurasian Eclipse.

The SSJO is composed of some of the finest jazz musicians in the region. Established artists blend with up-and-coming talent to create an ensemble of unparalleled power, finesse, and energy. Our special guest soloist is 22-year old pianist Isaiah J. Thompson, a native of Newark, NJ and Juilliard graduate who is fresh off an international tour with jazz legend Wynton Marsalis. SSJO featured soloists include tenor saxophone powerhouse Eddie Bayard, a central Ohio legend with a national reputation for fire and soul; former OSU jazz faculty member Pharez Whitted on trumpet; southwest Ohio’s inimitable Hal Melia on tenor saxophone and clarinet; and 19-year old vocal prodigy Christopher McDole.

In his three-decade career as an educator, administrator, performer and conductor, Todd Stoll has travelled to 4 continents and 22 countries bringing jazz to people of all ages and diverse backgrounds. After a 20-year career as an educator and band leader in central Ohio, Mr. Stoll became the Vice President of Education at Jazz at Lincoln Center (JALC) in New York City, the world’s largest institution dedicated to jazz. Since he joined the organization in 2011, JALC has produced more than 25,000 education events in the US and abroad. In his position there, he has grown the education program exponentially, with a special focus on underserved populations in urban cities across America. JALC’s innovative Essentially Ellington high school jazz band program has expanded during his tenure, providing 300,000 free scores to nearly 7,000 high schools in all 50 states and 57 countries.

An experienced performer, Duke Ellington expert, and jazz advocate, Mr. Stoll founded the Columbus Jazz Youth Orchestra (CJYO) in 1991 to give young people the chance to cultivate a love of jazz through performance. He served as the director until 2011. Under his direction, the CJYO released six CDs, won a DownBeat award, and toured Europe and South America. As a performer, he has appeared with numerous ensembles across several genres, and can be heard on Sirius XM radio with the Jazz at Lincoln Center Orchestra.

An in demand conductor and clinician Mr. Stoll has appeared with numerous all state ensembles, the NAFME All National Honors Jazz Ensemble, and in Havana, Cuba at renowned music conservatories Amadeo Roldan and La Escuela Nacional de Arte.

Tickets will be available for upcoming shows once the final 2020-2021 calendar is finalized. (There is a $2 per ticket credit card fee charged online).